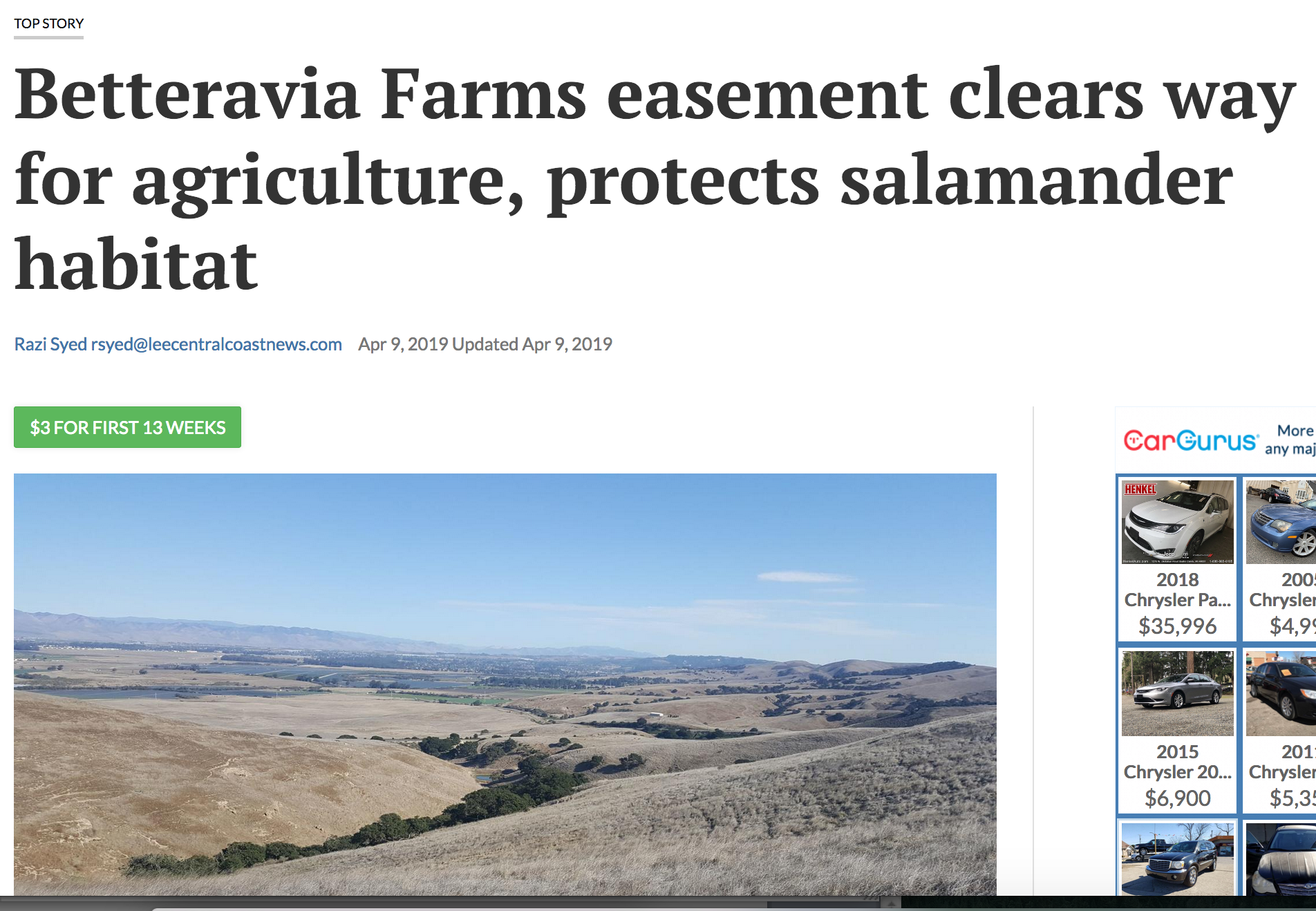 Aiming to get clear approval for ag-related work on a plot of land west of Orcutt, Betteravia Farms and the Land Trust for Santa Barbara County have entered into a conservation easement that preserves hundreds of acres of wildlife habitat while allowing the company to move farm operations forward on the remainder of the property.

The easement — which was negotiated by the Land Trust, Betteravia Farms, California Fish and Wildlife Department and the U.S. Fish and Wildlife Service — will protect around 430 acres of land on a 600-acre parcel located west of Orcutt, along Highway 1.

Conservation easements are voluntary legal agreements entered into by landowners with either a land trust or government agency. The agreements permanently limit allowable uses of land for the purpose of conservation while also allowing ownership of the land to stay with the family.

By using easements or outright buying land, the Land Trust looks to preserve natural resources, agricultural land and open space for future generations. During its 34 years in operation, the organization has helped protect around 27,000 acres of land from development.

The Betteravia Farms land covered under the agreement is home to the California tiger salamander, a threatened species, said Chet Work, executive director of the Land Trust. Because of that, Betteravia Farms’ use of the land was restricted.

The deal calls for 430 acres of land to be permanently preserved as a wildlife habitat for the salamanders. That portion of the land, still owned by Betteravia Farms, may continue to be used for grazing but will be restricted from other agricultural uses.

“[The salamanders] spend their lives living in shallow holes and if you run across the land with a plow, you don’t do them any favors,” Work said.

Betteravia Farms has permission to use the remaining 130 acres for other agricultural operations.

Joe Leonard, chief executive officer of Betteravia Farms, said he was proud to have worked out an arrangement that could be a model for cooperation between conservation agencies and agriculture businesses.

“As a family-owned farm welcoming in our fourth generation of farmers, we understand the importance of preserving our land and natural habitats for generations to come,” he said in a statement.

Work said the four-party agreement was a creative solution that met the needs of the federal and state authorities as well as the landowner.

“This allows them to do more with the land and ensures conservation for the salamander,” he said.

Work said Betteravia Farms represents the fourth or fifth property that the Land Trust has protected with salamander habitat on it.

In each of those cases, the Land Trust worked out different agreements with government authorities to meet the needs of the landowner.

“We’re always trying to find creative solutions based on the need of the landowner,” he said. “Sometimes, the owner is an individual, who could make use of a tax break; sometimes, it’s a rancher who needs revenue.”

State and federal authorities were instrumental in helping to broker the deal, Work said.

“I think for a long time, [the California Department of Fish and Wildlife] were looked at as the enemy,” he said. “Over the past years, they’ve been very proactive about working as collaborators.”

https://youtu.be/iWaPABlpc7Y On November 9, the Carpinteria City Council reviewed and voted to approve a proposal…

Raising $6.9 million, the Land Trust for Santa Barbara County is now the proud owner of 21 acres of open space on the Carpinteria Bluffs, a piece of oceanfront land that, over the years, investors have pushed to develop into a destination resort ​— ​only to be rebuffed by a conservation-minded community willing to back up sentiment with lots of cash.
DONATE
SUBSCRIBE
SHOP TO DONATE